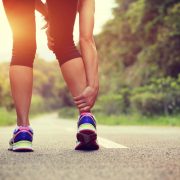 The Lingering Effects of Ankle Sprains

By Dan Gartner and Andrew Lim

Everyone has experienced an ankle sprain before. But what exactly happens when you sprain your ankle and what could be the lingering effects? Read more to find out.

An ankle sprain is an injury of the ligaments of the ankle. Ligaments are like ropes that join bone to bone and hold the joint together in a stable and functional position. Their role is to restrict potentially damaging excessive movements of the bones and soft tissues of the joint.

Ankle sprains are a common injury, especially in the sporting population but not exclusively. They are commonly seen in sports that involves sudden stopping or changes of direction i.e.  football/soccer, rugby, netball and AFL.

Some ankle sprains are completely unpreventable and a result of unforeseen external factors, such as stepping on another player’s foot, or a player falling on top of you, poor ground conditions and even poor equipment (shoes). However, some ankle injuries may be preventable. Injuries that arise spontaneously without any external contributing factors, generally from poor mechanics and control of the lower limb, premature fatigue, or from lack of strength or flexibility are to a degree preventable. 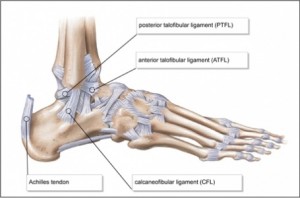 There are numerous ligaments in the ankle, which can be injured. Depending on the direction of the sprain, different structures can be damaged. By far the ‘inversion’ injury is the most common. 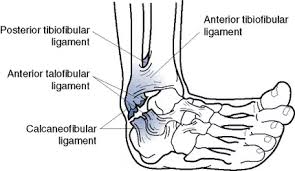 During an Inversion sprain of the ankle the most common ligaments injured are the lateral ligaments and more specifically at the front of the ankle, called the anterior talo-fibular ligament or ATFL. This ligament is injured when the foot is rolled underneath (inverted).  When the body weight falls through this direction the ligaments’ breaking capacity is exceeded and the ligament tears.

There are 3 grades of injury, a grade 3 or complete rupture of these ligaments being the worst.  This is when the ligament separates from either itself or the insertion to the bone.  In either case there is excessive movement now that affects the movements and stability of the joint.

A lower grade sprain of the ATFL can be managed with rest, ice, compression and elevation (RICE) and will usually resolve of its own accord in 2-4 weeks.  Rehab generally involves some re-strengthening of the lateral muscles of the leg and some re-learning of foot position sense and balance.  Grade 2 and 3 tears need to be managed more conservatively and should be assessed as early as it possible.

What we often observe in practice is that your pain and swelling may disappear over a few weeks to months, however quite often your ankle may still be left with limited range of motion. The irony is that patients are presenting with another complaint like foot, knee, hip or back pain) but we find the ‘weakest’ link in the lower limb is the ankle.

Dorsi-flexion movements or raising the foot towards the shin bone, is commonly decreased in ankle sprains, even after you think you have fully recovered. Dorsi flexion plays quite an important role in human movement. To walk, run, squat, lunge, kneel and/or move properly, you require adequate dorsi flexion in your ankle. Quite often if you lose the ability to dorsi flex your ankle another neighbouring joint will have to make up for it by moving more and working harder.

Let me give you a few examples of what can happen if you lose the ability dorsi flexion at the ankle: 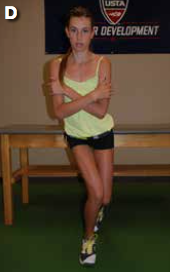 These are just the effects on the lower limb (we won’t touch on the torso and upper body) that result from poor ankle dorsi flexion. As you can see there are a lot of other joints that can compensate for the loss of motion at the ankle. This also increases the risk of other types of injuries (plantar fascitis and patella femoral pain) which may arise down the track if ankle dorsi flexion limitations are not addressed and managed properly.

So as you can see, an old ankle injury that is not rehab-ed back to a functional state can leave you at risk of having other injuries.

In practice, we use a few tests that may indicate if you have limited dorsi flexion or at risk of other lower limb injuries. A simple test that you can perform yourself at home or work is called a Knee to Wall test, performed in the video below.

During this test we suggest;

I have limited Dorsi Flexion in my ankle/s! What now?

This is a very common presentation in practice, and often overlooked as the initial pain and swelling of the previous injury has passed.

Secondly, a few questions to ask yourself:

If you answered yes to any of these questions, then most likely your limited dorsi flexion at your ankle may be contributing to poor lower limb function and increasing your risk for future (or past) lower limb injuries.

Finally, I would suggest consulting to one of our team at Functional Health and Performance, North Sydney for a more though assessment of your ankle and lower limb. Only after assessing you, will it be possible to formulate an appropriate treatment and rehab/prehab plan to minimise risk and prevention of future injuries to your lower limb.

To speak to one of our team at Functional Health and Performance in North Sydney, contact our office via email info@functionalhp.com.au or by phone 02 9955-5110 or via our online booking system.